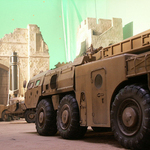 I've spoken with Rob Cohen and here is his request for the scuds.

Based on the pictures he's added more shots. Thanks Rob, again you've managed to blow his mind. He loves the scuds so much that he wants us to shoot the shit out of them prior to pyro. So we will cover the scuds from various angles with in the courtyard.